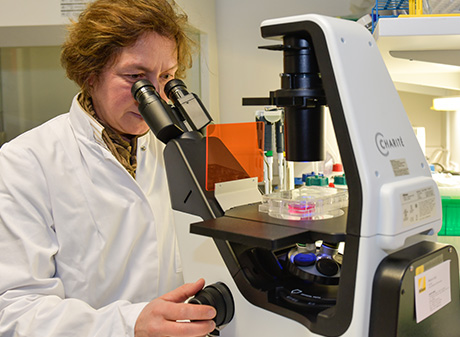 Due to physiologic and pathologic stimuli, the myocardium undergoes a complex process of adaptation, so called cardiac remodeling, which is only poorly understood. During the multifactorial genesis, e.g. inflammation plays a crucial role which leads to reorganization of the extracellular matrix and interstitial accumulation of connective tissue within the myocardium. Several studies postulate the direct intervention of cardiac remodeling as a potential pharmacological target, however, no suitable drugs are available.
Lipid-mediators are – in terms of structure and function – very heterogeneous substances in the organism. Resolvins are a group of omega-3-fatty acids whose potent anti-inflammatory and anti-fibrotic properties have been recently published.
This project aims to improve the understanding of the underlying molecular mechanisms of cardiac remodeling with respect to possible pharmacological targets of new lipid mediators.

Heart failure (HF) is a chronic, debilitating disease that impairs the ability of the heart to respond to increased demands for cardiac output. Recently, lipids have gained increasing interest as biomarkers, molecular mediators and therapeutic agents for various diseases including cardiovascular disease. Major contributors to this development have been new advanced technologies for the analysis of lipid species on a systems level by lipidomic profiling using sensitive mass spectrometry (MS) technologies. In parallel to these clinical/ technical developments, lipid species have been characterized as endogenous molecular mediators of cardiac morphology and function.
In our study we aim to investigate the role of circulating and cardiac lipids in the development of heart failure. For this, we will combine molecular, cellular and in-vivo approaches with state-of-the-art lipidomic profiling. We aim to identify new lipid mediators involved in the pathogenesis of chronic heart failure, and we want to understand how cellular lipids contribute to pathological responses under established cardiac stressors such as catecholamines.

Our recently publish data indicate that Palmitoleic Acid (C16:1) mediate exercise-induced development of physiological cardiac hypertrophy. While the in vivo cardiac effects of palmitoleic acid have been investigated extensively, the fundamental molecular signaling of this fatty acid in cardiomyocytes remains widely unclear.
The finding that C16:1 promotes the phosphorylation of the AKT protein (Foryst-Ludwig et al.) is currently the only hint to how palmitoleic acid brings about these physiological cardiac growth processes. Therefore the target of this projects is to investigate the impact of C16:1 on the AKT/FOXO signaling pathway, using a variety of different molecular biology techniques, in order to fully grasp the cellular processes that are being triggered by C16:1  and how they ultimately bring out physiological cardiac hypertrophy.

This project investigates the impact of palmitoleic acid (C16:1) on nuclear hormone receptors in the heart and especially its role in the development of physiologic hypertrophy. While we already know some of the effects on the heart in vivo the basic molecular signaling pathways of this fatty acid are still widely unknown.
Nuclear hormone receptors are part of a family of transcription factors which are located in cytosol and the nucleus of the cell. Classic ligands are hormones and lipids like e.g. steroids, androgens or vitamin A.
The aim of this project is to learn more about the signaling pathways and the pro-hypertrophic effects of this adipokine using novel sequencing methods. In cooperation with the Helmholtz-Institut Munich (H. Uhlenhaut) we are planning to explore the differential genome expression of C16:1 in cardiomyocytes.
By studying the effects palmitoleic acid on a molecular level we want to provide a new therapeutic option for patients suffering under heart hypertrophy and heart failure in the near future.

Cardiac metabolism undergoes changes in response to pathological hypertrophy (PH), characterized by increased reliance on glucose and decreased free fatty acid (FFA) oxidation. Also cardiac metabolism is influenced by other organs such as adipose tissue (AT). We aimed to investigate the effect of Adipose Triglyceride Lipase (ATGL) in AT on the development of PH in a pressure overload-induced cardiac hypertrophy model in mice.
In this study, we demonstrate that atATGL is crucial for the development of pressure overload-induced PH. The lack of ATGL in adipose tissue, the associated reduced lipolysis and the subsequent switch in cardiac metabolism from FFA oxidation to glycolysis are potential underlying mechanisms of this process.

Estrogen-receptor alpha is one of the major regulators in metabolism and obesity. In this project we aimed to define the relevance of adipose tissue ERalpha during high-fat diet (HFD)-induced obesity using a tissue specific knock-out model (atERKO). To our surprise HFD did not affect metabolic parameters in atERKO but induced severe inflammation processes.
These infections were characterized by massive uterine neutrophil infiltration and marked reduction of "anti-inflammatory"-macrophages, pointing to an affected immune response. In parallel, this model was linked to high estradiol levels. Therefore, we decided to focus on the interactions between estrogen signaling and dietary lipids, especially in regard to the effects on the immune response. Indeed, we identified stearic acid (C18:0) in a lipid profiling approach, as a fatty acid prominently induced by HFD, which is able to induce ERalpha-acylation. We could show, that this fatty acid inhibits E2-induced transcriptional activity and estradiol-stimulated anti-inflammatory macrophage polarization.
In summary, we are interested in the molecular mechanism, by which dietary fatty acids can influence the function of nuclear hormone receptor such as estrogen receptor alpha.

Drosophila melanogaster as a model to study heart function

The fruit fly Drosophila melanogaster has long been used as a model organism to understand not only basic genetics but also multiple human diseases. The vast array of sophisticated techniques allows researchers to utilize D. melanogaster in a broad range of research fields. Furthermore, researchers benefit from a fast life cycle and easy laboratory handling. Moreover, tissue-specific knockdown (KD) of genes is fast and easy to generate in Drosophila, compared to mammalian systems.
Recently, elegant methods were developed to investigate heart function in D. melanogaster (Ocorr 2014, Methods). We would like to employ these techniques to study interorgan-communication, more specifically the interactions between fat body and heart. Fruit flies have a linear, contractile heart tube that pumps hemolymph into the body. High-speed optical recording and specific movement detection algorithms (Fink 2009, Biotechniques) allow functional analysis of the Drosophila heart tube. This work will be employed in close collaboration with one of the worldwide leading laboratories in the studies of Drosophila heart function: Rolf Bodmer, Sanford-Burnham-Institute San Diego, USA.
Our aim is to identify new lipid mediators regulating Drosophila heart function. Using Drosophila as a model organisms we would like to determine lipid-dependent cardiac signaling pathways and putative target molecules involved in heart disease pathogenesis.

HDAC6 controls the development and progression of cardiac mal-adaptive hypertrophy